2019 has been a vintage year so far for music fans at the cinema. From big budget blockbusters like the epic musical fantasy Rocketman, to smaller and more intimate films like the Leonard Cohen doc Marianne & Leonard: Words of Love. This year has seen our screens jam packed with biopics, rockumentaries and concert films.

An undeniable reason for the popularity of these films is that they help to boost sales of an artist’s back catalogue. Record companies love them as the new work helps to bring an artist back into the public consciousness. Naturally then, some of these works smack more of the cynical cash in than others. But for my money, many of them are extraordinary, timeless works of cinema in their own right.

For me, Amazing Grace,the filmed version of the live concert/recording session Aretha Franklin undertook in 1971 in a Baptist church in Los Angeles is one of the finest examples of the music doc from this, or any, year. I’m not a religious person but seeing Franklin at the height of her powers, with that extraordinary voice and stage presence, communing with her ecstatic congregation felt like a genuinely spiritual experience.

This week sees two new films screening at the Showroom Cinema that continue 2019’s trend for bringing music to the big screen. The first is Gurinder Chadha’s (Viceroy’s House, Bend it Like Beckham) joyous love letter to the music of Bruce Springsteen, Blinded by the Light.

Set against a backdrop of rising racial tensions in Thatcher’s Britain in 1987, the film tells the story of music fanatic and aspiring writer Javed, whose world is turned upside down when he discovers the music of “The Boss”.

Yearning to escape his rundown hometown and the rules of his traditional Pakistani household, Javed finds himself caught between two worlds. Based on the memoir of Guardian journalist Sarfraz Manzoor, Blinded by the Light is a buoyant, life affirming coming of age story that speaks to the power of music to transcend race, religion and place.

We’re also excited to be screening the fascinating Pavarotti this weekend. Created from a combination of Luciano Pavarotti’s genre-redefining performances, and featuring never-before-seen footage, the film gives audiences a stunningly intimate portrait of the most beloved opera singer of all time.

Blinded by the Light opens at the Showroom Cinema on Friday the 9th August. Pavarotti screens at 1.10pm on Saturday 10th August and 3.45pm on Sunday the 11th August. 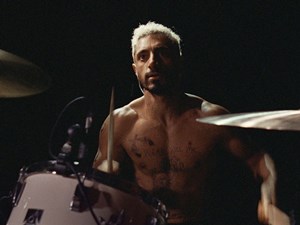