Storytelling is Alive and Well

“We’re really, really honed in on Yorkshire being the next premium hub.” Those were the inspiring words of the co-founder of a Doncaster-based creative industries business producing virtual reality content which captivates audiences via cutting edge technology and incredible storytelling.

Originally from Doncaster, Martin Taylor returned from living in Australia and decided his hometown was where he would start Prox & Reverie - a mixed-reality studio and immersive media innovation lab, purpose built to fuse physical and digital experiences.

“It’s the biggest business I've built. I'm super proud and we are planning to expand this ecosystem right here in Yorkshire.” The firm also has studios across the world, including New York, London and Sydney and works with major global media outlets.

Martin was the keynote speaker at the Doncaster South Yorkshire Cultural and Creative Industries Network (SYCCIN) in May 2022. Hosted by Meabh O’Donovan, Head of the National Film and Television School (NFTS) in Leeds, the evening was attended by more than 50 creative practitioners.

Opening discussions, Martin talked about and showed several examples of the complex projects the company has worked on, including one which was created in studios based across three countries. Martin explained: “The volumetric lighting captured the actors and performers as holograms, creating immersive and interactive experiences/ immersive cinema and films.”

Martin has been working in virtual reality for around ten years, which is “as long as it’s been around.” He also has 20 years of experience in the screen industries and has produced over 130 immersive projects. Prox & Reverie projects span several formats and locations, from immersive film and theatre to retail and museum installations. “No matter the complexity of the project, the end goal is always storytelling. We’re technologists here to tell a story,” Martin added.

“This is a very, very fast moving industry. But it does always come back to the fact that somebody has an idea - a character - they want to communicate to another person. And it might feel as though this technology is very complex, and it's running away very, very quickly - which it is. But it always comes back to story and character.

“We’re innovating new ways for audiences to experience virtual content in different spaces. We deal with different elements around how you fuse physical and digital worlds together in different ways. The way we do that is to partner with the industry - we’re high turnover collaborators.

Thinking about future innovations in the industry, Martin said: “The Metaverse is a thing that everybody's talking about right now and it’s utterly booming. But at the moment people are peering into these worlds on their tiny little phones and on their laptops. Where it's headed is that you'll be able to step into those worlds and you'll be able to pop out in another place, or take something into that world and collect something and bring it back. We're dealing with moving the boundaries between physical and digital realities.”

“Storytelling is alive and well”

A panel discussion, facilitated by Meabh, then explored the uniqueness of storytelling across several mediums. Phil Sheppard, author and illustrator, explained that he is working on a Doncaster Stories project for the National Literacy Trust - working with families and schools to develop literacy levels. Rebecca Mark-Lawson, film producer and owner of Tyke Films in Sheffield, works on documentaries and said her focus is to “encourage people to tell their own stories.” Sally Lockey, Project Director at Doncaster-based Right Up Our Street, said the organisation was utilising funding to develop creative projects on a hyperlocal level which improves engagement levels with the arts.

Meabh asked them if they felt there were rules or commonality in storytelling. Rebecca said that different formats - films, shorts, TV or VR as examples - required certain boundaries but that she and her team enjoyed being “agile” in their approach to storytelling; trying to “break the rules” in how they produce them.

Phil added that storytelling had rules, which he described as patterns. “There are seven different types of stories in the world and everything is a variation of particular story structures. But can we break those rules? Can we mix genres together? he reflected. To this point, he put forward that the evolution of different technologies could have impacted traditional storytelling rules but that in reality stories are still central to success. Phil gave an example of Pixar, creating animations which absolutely required key elements of a traditional story such as a strong plot and fantastic characters.

Working closely with community members, Sally added that “authenticity of voice” behind stories was absolutely critical. She said: “It’s about allowing people the space to talk about their own experiences and translating that into something sensitive.”

Rebecca gave her viewpoint from a cinematic perspective, adding: “It's not just the story,  it’s how you’re telling it. Everybody can tell a story about something that happened. But it’s the most interesting, the most original and the most cinematic which will get it to a wider audience.”

Meabh asked whether digital challenges caused any concerns for the panel. Phil responded: “Storytelling is alive and well, and it's everywhere. Mainstream storytelling is big budget movies and so on. Whereas in the local community, it's getting the local voices heard. We've got stories all around us.”

The panel were asked their thoughts on digital formats now being widely available for people to create and share their own stories online. Rebecca said this certainly made it more democratic, enabling people to utilise skills at home even when budgets are small.

Phil added that digital accessibility was a great concept to open up diversity but that literacy levels still needed to be good. He added: “Literacy is reading, writing, speaking and listening. A lot of young people say they want to be a YouTuber. But then we talk to them about the fact that they have to be good at speaking, or maybe that they will want to write a script before they start. And then, of course, there's the visual elements as well. In this new world, I really believe in bringing in different art forms to enhance literacy and to bring that alive.”

Rebecca shared that she found it “freeing” to sometimes be able to change and introduce different/new methods to projects which elevate the storytelling. She said that last year, for example, Tyke Films were commissioned to explore a virtual reality version of a short. Which allowed them to experiment things further. “We’re just feeling our way with it but we do try to find ways of using different methods and platforms as different ways into storytelling.”

Wrapping up the session, three creative practitioners shared updates with the audience in order to boost collaboration opportunities across the region. Pitches included an introduction to the Doncaster Education Cultural partnership in Doncaster; a writer seeking support to move a physiological horror to the next stage; and an insight into a production being planned for 2023 about the Fishlake community of Doncaster. 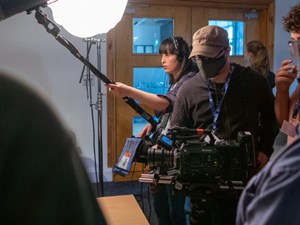 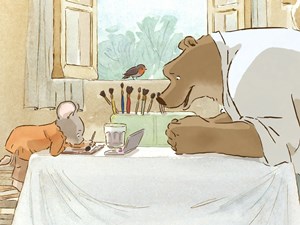