In 2011, Sean Durkin premiered his debut feature, Martha Marcy May Marlene, at Sundance Film Festival, winning an award for directing and putting his name on the map. He returns with The Nest, a dark drama which screened as part of the Showroom Cinema's Sundance Film Festival London Tour last month. The Nest stars Jude Law as Rory O'Hara, an English businessman living with his wife Allison (Carrie Coon), a riding instructor and their children in a suburb of New York City in the 1980s. Bored with what he feels are limited business opportunities in the US, Rory uproots his family to rural Surrey to pursue work with his old employer in London. Renting an imposing, old mansion in the countryside, he is convinced that the move will secure the family's wealth and help them become a part of the city elite.

What ensues, however, is a dramatic look at the underside of the 80s, an era defined by the capitalist leanings of leaders on both sides of the Atlantic, and the resulting yuppie culture that would mark the decade. A refreshing alternative to the current trend of glossy 1980s nostalgia, The Nest, removes the rose-tinted glasses and examines the period's culture with a bold and dramatic cynicism. The ostentatious house, the hunt for a bolthole in Mayfair and a condo in the Algarve is all entirely too much. Rory's pursuit of status, wealth and maintaining a successful façade concludes in some brilliantly performed exchanges with Allison, who has a steely, smart resolve. Both Coon and Law are excellently cast, with Law's image as a magnetic charmer subverted to something darker as he starts to become convinced by his own lies. At the same time, his wife can no longer take his overblown delusions.

Durkin also plays with some interesting subversions in his direction of the film. Painstakingly recreating an aesthetic that suggests The Nest will unfold in the manner of a haunted house film, Durkin carefully shifts our expectations. Rather than an evil supernatural presence, the family is tormented by a very human horror, which threatens to infect their whole dynamic. A precise, delicately told portrait of a family falling apart, Durkin's The Nest is a dramatic and accomplished second feature.

The Nest is screening at Showroom Cinema from Friday 27 August, with tickets are on sale now at showroomworkstation.org.uk. Other bank holiday releases include Candyman, The Last Bus, Souad and the classic Ghibli family adventure - Spirited Away.

This article first featured in the Sheffield Telegraph on Thursday 5 August 2021. 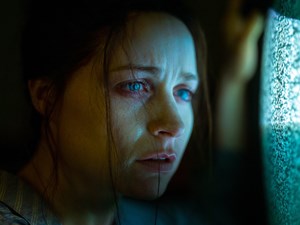